Belgium, Netherlands, Christine de Pizan, New friends, and Art, art, art! And the Internet, did I mention the Internet?

Wow, what a summer I have had! So many new experiences, so many new friends from all over the world, and world class museums! Where do I start? In small bites I think. 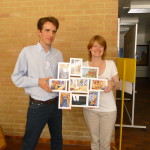 Conference hosts Olivier and Tanya show off a thank you gift from conference participants: Framed images of my collages from The Dinner in the City series!

To begin, about two years ago, a medieval scholar from Chicago, Julia Nephew, discovered my artwork on the internet. She was writing an article on the 15th century writer Christine de Pizan for an academic journal. I just happened to have used Christine in a series of collages I created between 2003 and 2007.

Julia asked permission to use some of my images in her article. We negotiated a contract and some months later a book arrived from Florence, Italy containing Julia’s article and my images. Because of this I was invited to speak at the North American Conference of Medieval Scholars at Western Michigan University. Because of that, Julia and I were invited to co-present at the International Colloquium Christine de Pizan in Belgium!

So, off I go to Belgium, by way of the Netherlands. I will expand on that in a future post, but this time I want to give a shout out to the organizers of the conference, Oliver and Tanya of the Catholic University Louvain la Neuve in Belgium. They were the ultimate hosts!